Hypoxia-inducible factors 1 and 2 (HIF-1 and -2) control oxygen supply to tissues by regulating erythropoiesis, angiogenesis and vascular homeostasis. HIFs are regulated in response to oxygen availability by prolyl-4-hydroxylase domain (PHD) proteins, with PHD2 being the main oxygen sensor that controls HIF activity under normoxia. In this study, we used a genetic approach to investigate the endothelial PHD2/HIF axis in the regulation of vascular function. We found that inactivation of Phd2 in endothelial cells specifically resulted in severe pulmonary hypertension (∼118% increase in right ventricular systolic pressure) but not polycythemia and was associated with abnormal muscularization of peripheral pulmonary arteries and right ventricular hypertrophy. Concurrent inactivation of either Hif1a or Hif2a in endothelial cell-specific Phd2 mutants demonstrated that the development of pulmonary hypertension was dependent on HIF-2α but not HIF-1α. Furthermore, endothelial HIF-2α was required for the development of increased pulmonary artery pressures in a model of pulmonary hypertension induced by chronic hypoxia. We propose that these HIF-2-dependent effects are partially due to increased expression of vasoconstrictor molecule endothelin 1 and a concomitant decrease in vasodilatory apelin receptor signaling. Taken together, our data identify endothelial HIF-2 as a key transcription factor in the pathogenesis of pulmonary hypertension. 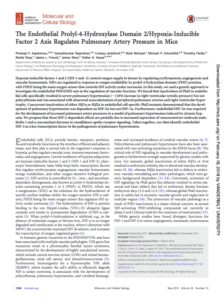